Last night was the first Adi and Jasper show (as Justin called it) of 2013 – the WineGems tasting at &union.

A full house (Gemma says she takes 18 bookings, but there were at least 30 people squeezed into the bar) tasted both the Secateurs, the Family Red and White blend, the funky white and were also treated to (another) sneak peak of Jasper’s first offering – a red blend and a chenin blanc. 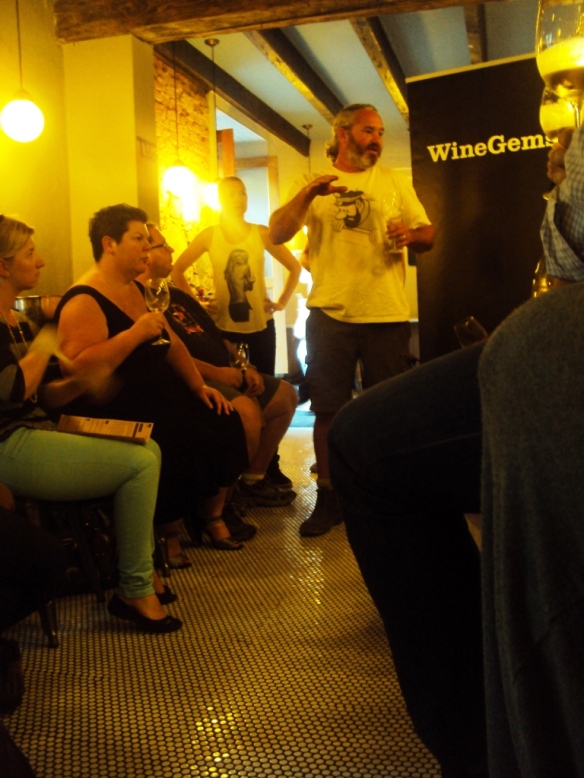 From what I see on twitter the crowd really enjoyed it. With Adi on top form – full of jokes and stories – and Jasper taking his time to tell the Muskeljaatkat story in detail – there were lots of laughs.

Blackdelilah: Did I mention we had an AWESOME wine tasting @andUnionwine last night? Wines by @AABadenhorst & his able-bodied assistant, Jasper #goodstuff

I tried to tweet some of the Adinisms and quotes from the ‘comedy show’ – check out our twitter stream if you want to see more.

AABadenhorst: We work on psychological ripeness. You don’t wanna pick on a Friday for instance. – Adi, duh.

AABadenhorst: “This is not a pretty wine but it’s made to drink. We drink LOTS of this” – Adi. #secateurs Red

AABadenhorst: When is harvest over? Well the #oesAf party is on 22 March, so before then…

YES. We put some dates in diaries over dinner (at the ping pong table)

I also have dates for two tasting brunches, but I have a long waiting list to inform of that first. But watch this space for more details soon.

Thanks Gemma and everyone who showed up, tasted, laughed, bough wine and and and. Love you guys…

Tonight we will be pouring and tasting at &union. The tasting is fully booked – but if you are confirmed you can look forward to:

and the non-vintage Funky White.

All of these will be on sale at cellar door prices after the tasting.

On Thursday we will be back in Ape Town to pour, taste and chat at the first ever Wine Market at the City Bowl Market on Hope Street. Check out the event here.

Hope to see many familiar and new faces there.